A Complication its any feature beyond a simple display of hours and minutes. The most common complication are day/date displays, alarms, chronographs, and automatic winding mechanisms. Some models are considered grand complications, the most complicated watch has 57: The Vacheron Constantin Reference 57260. 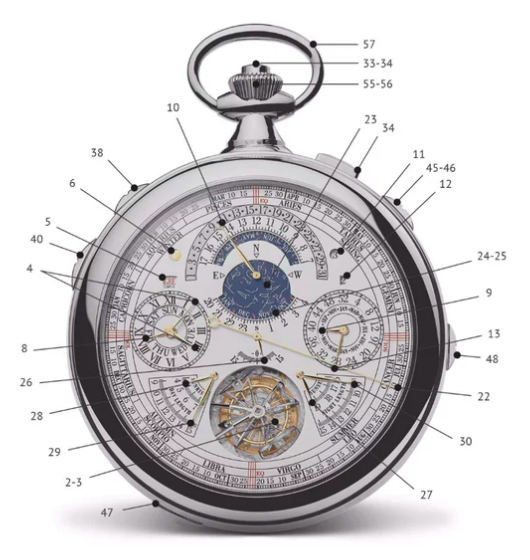 A complication it has to be related to time, a barometer or a thermometer arn’t considered complications.

These are some of the most known used: 24-hour watch has an hour hand sweeping through 24 divisions where most watches have a 12-hour dial. Automatic watch (self-winding watch) uses the motion of the wrist and arm to recapture energy. Chronograph has a second hand that can be stopped, started and restarted for measuring time periods. Double chronograph or rattrapante, multiple second hands for split-second, lap timing or timing multiple events Flyback chronograph, rapid reset of the chronograph as it is running, with the chronograph continuing to run immediately after with no delay following the reset. This is faster than the stop-reset-start required of normal chronographs. Calendar Watches can display, date, week of year and/or month either alone or in combination. Can include display of leap year cycle (year 1 to 4) Multiple time zones Equation of time variation within the year Display of zone solar time (as opposed to standard time) Display of true local solar time Display of sidereal time Display of time zones (for the world traveler) Time of sunset Time of sunrise Date of Easter Repeater Passing strike (chiming watch) Alarm Sign of the Zodiac Moon phases Mechanised star chart Astrolabe dial Planetarium dial Perpetual calendar Annual calendar Power reserve or réserve de marche Quickset date Dead second Foudroyante (Flying Seconds) There are horological complications and then non horological complications - the ones that don’t measure time, like the different buckle closure, or even the Tourbillon, considered by some to not be an horological complication. A tourbillon is a mechanical refinement to an escapement that mitigates the effects of gravity on the operation of a timepiece, it was developed around 1795 and patented by the French-Swiss watchmaker Abraham-Louis Breguet. The thing is that it was created for pocket watches that spend most of the day in the same position, a tourbillon on a wrist watch it has no use, watches are in a lot of different positions along the day, and the wrist movements well compensate the effects of gravity that the tourbillon corrects by rotating the escapement. Complications are complicated! Complications are great! Complications make us feel like we can encapsulate time as we please and play with it! This could be what Mondia was thinking when they develop the Top Second Model. 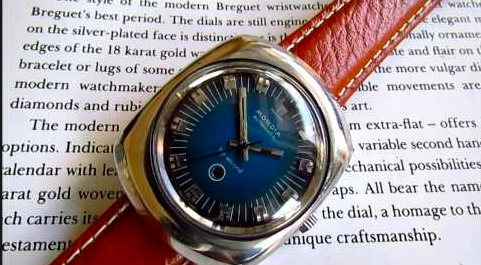 Most of the complications have some pratical use, well, not the one on the Top Second - a mechanical watch with a flashing seconds dot. The watch already has a seconds hand that, well... it shows the seconds, this flashing seconds dot its just for fun, it’s just to show that they can be creative, its just to be puzzling. The idea it’s very simple - a hole on the dial and then behind of it a rotating mechanism, you can checkit on this gif we made:

When you have a Mondia Top Second on your wrist you can’t stop looking at it, it’s like a kind of hypnosis.